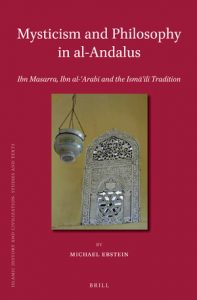 This book is an important and welcome contribution to modern scholarship, written with a remarkable sense of clarity, an impressive erudition, and constant attention to basing the discussion on textual evidence itself. Its purpose is to demonstrate that theinfluence of Neoplatonic Ismailism stemming from the Orient has been far more sig-nificant to the development of Sunni philosophical mysticism in al-Andalus than ordinarily assumed.

To achieve this aim, Ebstein concentrates his research on twogreat representatives of Andalusi mysticism, namely Ibn Masarra (d. 319/931), usually acknowledged as the first author with an original form of thought in the Peninsula, and IbnʿArabī (d. 638/1240), who represents in various respects the pinnacle of Islamic mysticism in al-Andalus.

Ebstein’s analysis is articulated around five closely interdependent topics, each making up one chapter of the book:

What these notions have in common is to receive in Ismaili philosophy a theosophical treatment of its own, much indebted to Neoplatonism and which, as such, moves the authors that incorporate them in their system a long way from the standard productions of Sufism. As Ebstein argues (p. 3), this is a type of mysticism which “exhibits a unique blend of Neoplatonic mystical philosophy, cosmogonic-cosmological speculations, occult sciences such as the science of letters and astrology, and more – a blend that is typically lacking in the eastern Sufi works written prior to the rise of Ibn al-ʿArabī, but which is characteristic of Ismaili literature”.

Ebstein’s method is the same throughout. For each notion discussed, he begins by discussing its centrality to the Shii–Ismaili tradition of Neoplatonist philosophy as it emerged in the East, reaching its full development with authors such as Nasafī, Rāzī, Sijistānī and Kirmānī, and then proceeds with a comparison of this material with the texts of Ibn Masarra and Ibn ʿArabī that have come down to us. In each case, he is able to provide textual evidence that is so striking and so solid that one cannot but agree with his hypothesis and argumentation. Not surprisingly, the Theology of Aristotle, a ninth-century Arabic adaptation of Plotinus’s Enneads known to us in two versions, plays a key role in the discussion. For instance, Ibn Masarra’s Khawāsṣ ̣ al-ḥurūf and Ibn ʿArabī’s Futuḥāt both integrate the notion of God’s word and that of the Divine will into a Neoplatonic scheme which patently echoes what is affirmed in the longer version of the Theology (pp. 51–5).

Yet what will be most apparent to any reader is that no other work is mentioned more frequently in this essay than the famous encyclopaedic corpus of writings known as Rasā’il Ikhwān al-Ṣafā’, eventually supplemented with the Risālā al-Jāmiʿa which purports to be the summary of this corpus and whose exact relation with the Rasā’il remains unclear. In fact, it would not be exaggerating to say that the Rasā’il form the genuine common thread of all the chapters of the books (with perhaps the exception of letter speculation, where Ikhwānian influence is less prevalent).

In the conclusion of his essay, Ebstein observes: “‘The Epistles of the Sincere Brethren’ had a profound impact on the mythic–philosophical thought in medieval al-Andalus. Many themes which are found in the Epistles – the Divine creative world in its Neoplatonic context; the hierarchal view of human society and of the universe at large; the figure of the perfect man; the notion of parallel worlds; or the perception of man and the cosmos as Divine books – resurface in the writings of both Ibn Masarra and Ibn al-ʿArabī, and thus point to the close affinity between these various authors” (p. 235). In their annotated translation of Ibn Masarra’s Risālat al-iʿtibār, Sarah Stroumsa and Sara Sviri have also pointed out parallels in both language and ideas with the Rasā’il that “strongly suggest a common intellectual milieu which produced them both” (S. Stroumsa and S. Sviri, “The beginnings of mystical philosophy in al-Andalus: Ibn Masarra and the Epistle on Contemplation”, Jerusalem Studies in Arabic and Islam, 36, 2009, pp. 201–53, here p. 210).

My own recent research on the early reception of the “corpus Ikhwānianum” in al-Andalus, and on the implication this problem has for the dating of redaction of the Epistles (“Magia en al-Andalus: Rasā’il Ijwān al-Ṣafā’, Rutbat al-ḤakīmyGāyat al-Ḥakīm (Picatrix)”’, in Al-Qantara, 34/2, 2013, pp. 297–344) has led me not only to corroborate these views in full but also to suggest that we can go a step further in the consideration of the Rasā’il as a model, and probably even a direct one, to Ibn Masarra. In my view, the Risālat al-iʿtibār derives from the Rasā’il most of its motifs – as for instance “the Ladder of Ascension”, “the upsidedown plants”, “the Footstool and the Throne” or “the image of the world as a book” – and, what is more, the very first words of the treatise include a typically Ikhwānian formula that suggests that Ibn Masarra might have wished subtly to acknowledge his own debt to the Brethren in that place (G. de Callataÿ, “Philosophy and bātinism: ̣Ibn Masarra’s Risālat al-i‛tibār and the Rasā’il Ikhwān al-Ṣafā’”, forthcoming in JSAI). At the end of Ebstein’s magisterial demonstration, one fundamental question remains: through which channels was this particular type of Eastern mystical philosophy transmitted to the western part of Islam, and how can we account for its presence in works of Sunni authors such as Ibn Masarra and Ibn ‘Arabī?

Although not claiming to offer any final answer to this discussion, Ebstein puts forward some interesting elements at the beginning and at the end of his book. Among other possible explanations, his preference goes to the suggestion that “in the course of their political–religious struggle against the Fātiṃ īs, the Andalusīs became exposed to Ismā‘īlī conceptions and perhaps even to Ismā‘īlī writings” (p. 5). This is certainly a possibility, but it has its limitations. At least in the case of the Rasā’il Ikhwān al-Ṣafā’, a work which seems to have been largely ignored by the Fātimid ̣ da‘wa, I would be inclined to regard as much more decisive the journeys accomplished in the Orient by so many Andalusī mystics of the ninth and tenth centuries, including Ibn Masarra and some of his followers, as has begun to be documented in recent decades (M. Marín, “Abū Saʿīd ibn al-Arābī et le développement du soufisme en al-Andalus”, Revue du monde musulman et de la Méditerranée, 63–4, 1992, pp. 28–38).