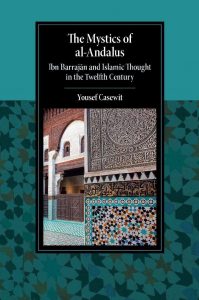 This is an important and timely book, one that augments a recent renewal of scholarly interest in the Andalusī mystical-philosophical tradition. The main factor enabling this renewal has been the availability of editions of Arabic works by Andalusī mystic-philosophers such as Ibn Masarra (d. 519/931), Ibn Qasī(d. 546/1151) and Ibn Barrajān (d. 536/1141). This painstaking and often insufficiently appreciated effort deserves to be acknowledged, valued, and encouraged, as it is the only way to inject new blood into subjects that have otherwise become ossified through repetition.

Ibn Masarra’s two surviving treatises were published between 1978 and 1982 by the Egyptian scholar Muḥammad Kamāl Jaʿfar. However, his discovery in the Chester Beatty library of works long considered to have been lost took time to spread in the Western academic world, with Claude Addas being among the first to draw attention toit in her book on Ibn ʿArabī published in 1989. Since then, Ibn Masarra’s works and thought have been studied by an increasing number of  scholars such as E. Tornero, J. Kenny, J. Vahid Brown, S. Sviri, S. Stroumsa and P. Garrido. Ibn Qasī’s Kitāb khalʿ al-naʿlayn was published in 1997 by the Moroccan scholar Muḥammad al-Amrānī, finally providing us with the complete text. His edition supersedes the previous partial editions by a number of Western scholars, who included them in their unpublished doctoral theses dealing with this intriguing mystic who led a rebellion in the Algarve (southern Portugal) against the Almoravids. Al-Amrānī’s edition was followed by the excellent study by M. Ebstein that provided us with the first thorough analysis of Ibn Qasī’s complex thought. Ibn Barrajān’s book on God’s names and his Qur’ān commentary have each been the subject of two editions: his Sharḥ asmāʾ Allāh al-ḥusnā was published in 2000 and 2009, and his Tanbīh al-afhām in 2011 and 2013. In 2016 G. Böwering and Yousef Casewit edited Ibn Barrajān’s Īḍāḥ al-ḥikma bi-aḥkām al-ʿibra. Two years prior, Yousef Casewit completed his doctoral thesis entitled The Forgotten Mystic: Ibn Barrajān (d. 536/1141) and the Andalusīan Muʿtabirūn (Ph.D. Diss., Yale University, 2014), which was the starting point for the book currently under review.

Divided into eight chapters with an introduction and conclusions, Yousef Casewit offers the first comprehensive account of Ibn Barrajān’s doctrines, building upon what he and G. Böwering had already advanced in their 2016 study. Casewit’s detailed and insightful account of such doctrines (chapters 5 to 8) takes the reader to a fascinating tour around and inside Ibn Barrajān’s complex thought. It encompasses divine descent and human ascent with a concentrated focus on scripture, foremost the Qurʾān, but also the Hadith and – excitingly – the Bible. Casewit has rightly decided to convey what he has learned about Ibn Barrajān’s approach to God and His creation by employing the mystic’s own terminology, without trying to insert him in existing interpretative frameworks that were constructed without the necessary grasp on original sources.

The centrality of iʿtibār is highlighted – as it should be – referring to a crucial concept in Ibn Barrajān’s thought, the crossing from the visible into the unseen, which is achieved through the training of intellect, soul, and body, and made possible by the correspondences that exist between human being, creation, and revelation. This is an approach that can be shown to be closely connected with Ibn Masarra’s thought.

Chapters 5 to 8 are a necessary read for anyone interested in the history of Islamic mysticism, not only in al-Andalus, but also in general, and are especially necessary for anyone interested in the Andalusī background of Ibn ʿArabī’s oeuvre and thought. Those who want to understand the epistemological and spiritual concerns that were so prominent in the Islamic West during the sixth/twelfth century cannot do without them, as they enrich and yet also transform what has been written previously on the topic. Taking into account the advances made regarding similar thinkers and advances made regarding the study of North African mysticism, this contribution further highlights the necessity of producing a new synthesis in the near future, since previous ones such as V. Cornell’s Realm of the Saint, for all their value, now need to be updated.

Chapters 1 and 2 of Casewit’s book are already a welcome attempt to insert the results of recent scholarship into a new narrative about the formation and development of Andalusī mysticism. The topic deserves, however, a longer number of pages and more familiariity with the Andalusī (and North African) context. A particularly valuable chapter is that devoted to the chronology and manuscript tradition of Ibn Barrajān’s works, with the added interest of a thematic overview regarding their contents.

What is – in any case – clear is that in Ibn Barrajān’s times there was a debate regarding the acceptability of his thought that  touched upon both its religious and political dimensions, a debate that has continued since then, in the same way that there was and still is a debate regarding Ibn Masarra’s thought. Ibn Qasī’s rebellion and proclamation as political and religious leader makes his case special, as it leaves no doubt about hispolitical ambitions. The connections between his thought and that of the other two oblige us to discuss the extent to which Ibn Masarra and Ibn Barrajān were also ‘political mystics’.

My response to this point of inquiry would be positive; ‘political mysticism’ is the way that we ought to refer to their thought to give it justice. The political potential could be acted upon or not, but it is there, and Pierre Guichard is to be commended for having spotted it already in 1990-1991, in spite of not having had at his disposal the data now available.

The publication of Casewit’s study has to be celebrated as an excellent accomplishment on its own, and as another welcome step toward a better understanding of the religious and political history of the pre-modern Islamic West.